Time is a familiar concept to everybody, yet very hard to define. Some scientists define time to be the progress of events that occur in an irreversible succession from the past, through the present, and into the future. There are also many philosphical discussions of time, but those will not be mentioned here.

Time is one of the seven fundamental physical quantities in the International System of Units (SI), which can be used to define other physical quantities, such as speed. In everyday life, time is commonly measured in units of seconds, minutes, hours, days, weeks, months, and years, among others. 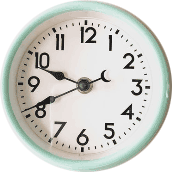 A 24-hour clock removes the need for an AM and PM designation, since the hours count from 0 up to 23 with 0 being midnight and 23 being 11 PM.


How to read an analog clock

Though many of us may be used to reading a digital clock, it can be useful to be able to read an analog clock in case a digital clock is not available.

The twelve numerals and the large tick marks written on the clock above represent the hours, 1-12. There are 60 marks in total to represent the 60 minutes in an hour and 60 seconds in a minute.

There are normally two or three "hands" on an analog clock. When there are only two hands, the longer hand indicates what minute it is and the shorter hand indicates what hour it is. When there is a third hand (usually the longest but not necessarily), this hand indicates the second. If the length of the hand is difficult to differentiate from the minute hand, note that the second hand will be moving every second, much faster than the minute or hour hand. The design of the second hand is also often different from that of the minute and hour hands, which typically have the same design.

The terms clockwise and counterclockwise come from the direction that the hands on a clock move over time. When the clock hand rotates in the direction of:

So, to tell time on an analog clock:

So the clock above reads: