A parabola is defined as a collection of points such that the distance to a fixed point (the focus) and a fixed straight line (the directrix) are equal. But it's probably easier to remember it as the U-shaped curved line created when a quadratic is graphed.

Many real-world objects travel in a parabolic shape. When you shoot a basketball, the path of the ball creates a parabola.

). You will learn more about these when you explore conics.

For quadratics in the standard form ax2 + bx + c, the axis of symmetry can be found using the equation x =

. To find the y-coordinate of the vertex, find the axis of symmetry and substitute that x-value into the original equation. 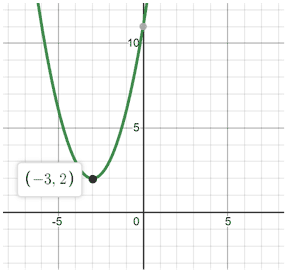 Calculating the focus and directrix

Below is an example of how to calculate the focus and directrix that may provide a better understanding of the mathematical definition of a parabola provided above: 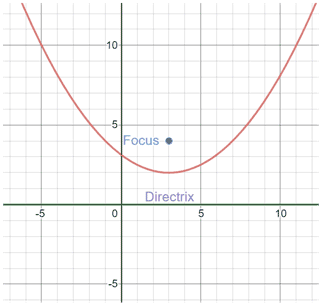 For horizontal parabolas, the vertex is x = a(y - k)2 + h, where (h,k) is the vertex. The focus of parabolas in this form have a focus located at (h +

Vertex form of a parabola

Vertex form is very similar to the general expression for function transformations. Vertex form makes it much easier to graph a parabola because it makes it easy to plot the vertex.

From this equation, we can already tell that the vertex of the parabola is at (1,4), and the axis of symmetry is at x = 1. Now all that has to be done is to plug in points around the vertex, then graph.

You can use completing the square to convert a quadratic in standard form into vertex form. You can also convert to vertex form by using the knowledge that the vertex lies on the axis of symmetry.

To convert a parabola in vertex form to standard form, expand the equation and simplify.