Sine, written as sinРЂА(θ), is one of the six fundamental trigonometric functions.

For a right triangle with an acute angle, θ, the sine value of this angle is defined to be the ratio of the opposite side length to the hypotenuse length.

Find sinРЂА(θ) for the right triangle below.

We can also use the sine function when solving real world problems involving right triangles.

A wheel chair ramp needs to have an angle of 10° and a rise of 3 feet, what is the length of the ramp?

in radians). The unit circle definition allows us to extend the domain of trigonometric functions to all real numbers. Refer to the figure below. 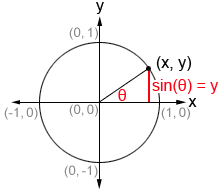 meaning that the y-value of any point on the circumference of the unit circle is equal to sinРЂА(θ).

Values of the sine function

There are many methods that can be used to determine the value for sine, such as referencing a table of cosines, using a calculator, and approximating using the Taylor Series of sine. In most practical cases, it is not necessary to compute a sine value by hand, and a table, calculator, or some other reference will be provided.

While we can find sine value for any angle, there are some angles that are more frequently used in trigonometry. Below are 16 commonly used angles in both radians and degrees, along with the coordinates of their corresponding points on the unit circle. 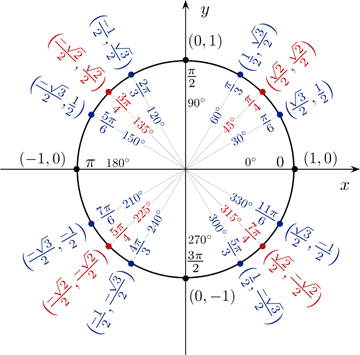 The above figure serves as a reference for quickly determining the sines (y-value) and cosines (x-value) of angles that are commonly used in trigonometry. As can be seen from the figure, sine has a value of 0 at 0° and a value of 1 at 90°. Cosine follows the opposite pattern; this is because sine and cosine are cofunctions (described later). The other commonly used angles are 30° (

) and their respective multiples. The cosine and sine values of these angles are worth memorizing in the context of trigonometry, since they are very commonly used.

One method that may help with memorizing these values is to express all the values of sin(θ) as fractions involving a square root. Starting from 0° and progressing through 90°, sin(0°) = 0 =

. The subsequent values, sin(30°), sin(45°), sin(60°), and sin(90°) follow a pattern such that, using the value of sin(0°) as a reference, to find the values of sine for the subsequent angles, we simply increase the number under the radical sign in the numerator by 1, as shown below.

Knowing the values of cosine and sine for angles in the first quadrant allows us to determine their values for corresponding angles in the rest of the quadrants in the coordinate plane through the use of reference angles.

Because θ' is the reference angle of θ, both sinРЂА(θ) and sinРЂА(θ') have the same value. For example, 30° is the reference angle of 210°, and if we reference the unit circle, we can see that the sine values of both have a magnitude of 1/2, albeit they have different signs. Because all angles have a reference angle, we really only need to know the values of sinРЂА(θ) (as well as those of other trigonometric functions) in quadrant I. All other corresponding angles will have values of the same magnitude, and we just need to pay attention to their signs based on the quadrant that the terminal side of the angle lies in. Below is a table showing the signs of cosine, sine, and tangent in each quadrant.

Properties of the sine function

Below are a number of properties of the sine function that may be helpful to know when working with trigonometric functions.

Sine is a cofunction of cosine

A cofunction is a function in which f(A) = g(B) given that A and B are complementary angles. In the context of cosine and sine,

Referencing the unit circle shown above, we can plug in values for cosРЂА(30°) and sinРЂА(60°) and see that:

Sine is an odd function

An odd function is a function in which -f(x)=f(-x). It has symmetry about the origin. Thus,

Referencing the unit circle, we can see that sinРЂА(60°)=

. This is only one example, but this property holds true for all angles.

Sine is a periodic function

Trigonometric functions are commonly used to model periodic phenomena due to their periodicity; no matter what point we start at on the unit circle, if we travel a distance of 2π (360°) along the unit circle from that point, we will arrive back at our starting point. If we look at the sine function, we will find that it repeats every 2π, so 2π is the period of the sine function. We can write this as:

The figure below shows an example of this periodicity. 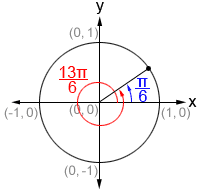 In blue, we see that

, we get the angle shown in red,

. As can be seen in the figure, even though there is a different degree of rotation in both angles, their terminal sides are exactly the same, meaning that

. We could add another 2π, and would still see that

has the same sine value as

. This is the nature of periodic functions.

are referred to as coterminal angles; they are angles with the same initial and terminal sides, but with different rotations.

Graph of the sine function

The graph of sine is periodic, meaning that it repeats itself indefinitely and has a domain of -∞<x<∞. The sine graph has an amplitude of 1; its range is -1≤y≤1. Below is a graph of y=sinРЂА(x) in the interval [0,2π], showing just one period of the sine function. 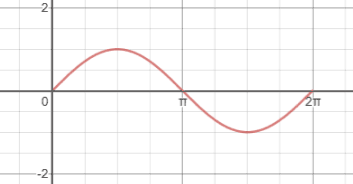 Repeating this portion of y=sinРЂА(x) indefinitely to the left and right side would result in the full graph of sine. Below is a graph showing four periods of the sine function in the interval [-4π,4π].

In this graph, we can see that y=sinРЂА(x) exhibits symmetry about the origin; if the graph is reflected about the origin, it creates a mirror image. This confirms that sine is an odd function, since -sinРЂА(x)=sinРЂА(-x).

The general form of the sine function is

where A, B, C, and D are constants. To be able to graph a sine equation in general form, we need to first understand how each of the constants affects the original graph of y=sinРЂА(x), as shown above. To apply anything written below, the equation must be in the form specified above; be careful with signs.

A—the amplitude of the function; the height from the center of the graph to a maximum or minimum. In y=sinРЂА(x), the center is the x-axis, and the amplitude is 1, or A=1, so the highest and lowest points the graph reaches are 1 and -1, the range of sinРЂА(x).

Compared to y=sinРЂА(x), shown in purple below, the function y=2 sinРЂА(x) (red) has an amplitude that is twice that of the original sine graph.

. In y=sinРЂА(x) the period is 2π. We can confirm this by looking at the sine graph. Referencing the figure above, we can see that the shape of the sine graph between [-2π, 0] is equivalent to that from [0, 2π] meaning that it repeats itself over an interval of 2π; ie, it has a period of 2π.

. This means that the graph repeats itself every π rather than every 2π.

The figure below shows y=sinРЂА(x) (purple) and

(red). Using one of the peaks of the sine graph as a reference, we can see that the peak at

to the left from its original position and is now at (0,1). 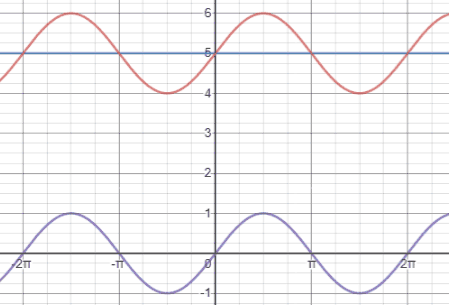 (red) compared to that of y=sinРЂА(x) (purple). 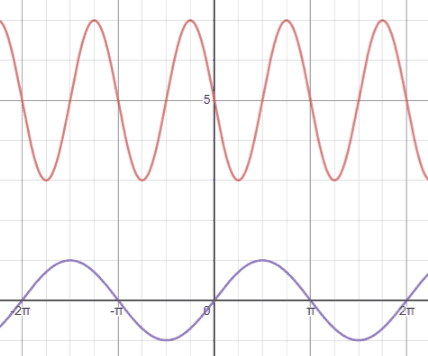