The terms used to describe the sides of a right triangle are the hypotenuse, the adjacent side, and the opposite side, as shown in the figure above.

A common method for remembering the above relationships is through use of the mnemonic “soh cah toa.” The s, c, and t stand for sine, cosine, and tangent, and o, a, and h stand for opposite, adjacent, and hypotenuse.

Find the values of the six trigonometric given the right triangle below.

The hypotenuse of the triangle is 10, and the adjacent side has a length of 5. Using the Pythagorean theorem, we can find the length of the third, opposite, side:

Now that we know all the sides of the triangle with reference to the angle, 60°, we can plug them into the trigonometric functions as defined above: 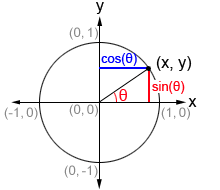 Thus, on the unit circle, cosine and sine can be defined as:

Cosecant, secant, and cotangent are the reciprocals of sine, cosine, and tangent respectively, and are defined as:

The values of the trigonometric functions can also be represented by the lengths of the line segments in a coordinate plane with a unit circle as show in the diagram below. 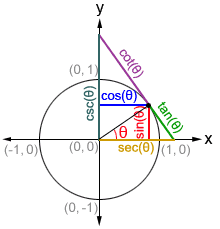 Acute angles in the first quadrant can be used to determine the values of trigonometric functions of angles in other quadrants. These angles are called reference angles since we will reference their values to determine other values. It is always the smallest angle (with reference to the x-axis) that can be made from the terminal side of an angle. The figures below shows an angle θ and its reference angle θ' in a quadrant other than the first quadrant.

If one angle is an reference angle of another, the trigonometric functions of these two angles have the same values in magnitude, and we just need to pay attention to their signs based on the quadrant that the terminal side of the angle lies in. For example, 30° is the reference angle of 210° with sine values sin(30°)=

. We can see that the sine values of both have a magnitude of

, albeit they have different signs.

Below is a table showing the signs of the 6 trigonometric functions in each quadrant.

Trigonometric functions are odd or even

Note: this only provides the result in the first quadrant. If consider other quadrants, arcsin(0.5) is also equal to 150°. Also, since arcsin is a periodic function, to account for all the possible values of arcsine, we need to account for its periodicity. The solution is therefore

where n is an integer. When using the other inverse trigonometric functions, their periodicity also needs to be taken into account to determine all the solutions.

Graphs of the trigonometric functions 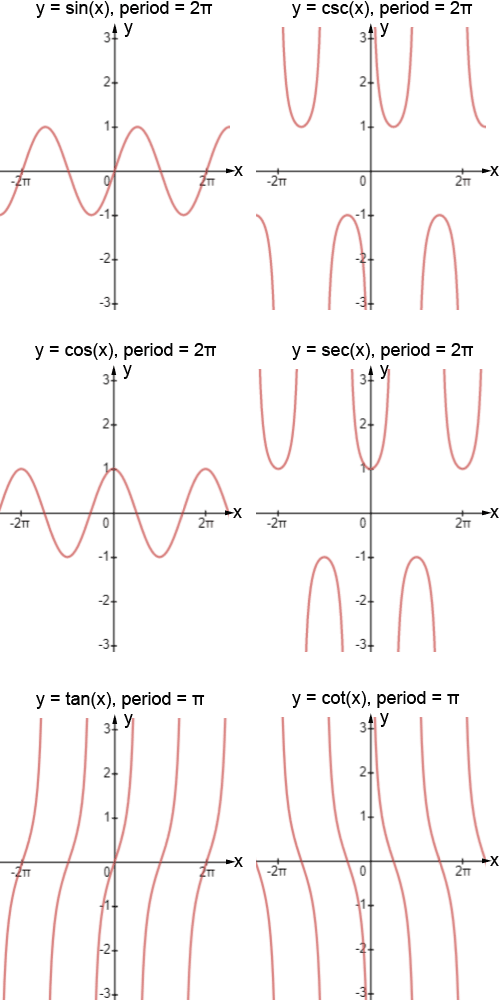