A diagonal for a polygon gives support for physical structures.

Number of diagonals in polygons

can be used to find the number of diagonals, d, for a polygon with n sides called an n-gon. The only polygon that has no diagonals is a triangle since all of its vertices are consecutive.

The following table lists the number of diagonals in common polygons.

Some properties of diagonals 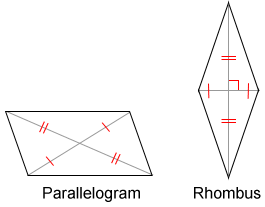 For a polyhedron, a diagonal is a line segment joining two vertices that are in different faces. The end points of the diagonal share no common edges or faces. These diagonals are sometimes referred to as space diagonals.

The only polyhedron that contains no space diagonals is the tetrahedron.

The 3 lateral faces that attach to the edges of the base meet at a point called the vertex so, no diagonals can be constructed that are in different faces.